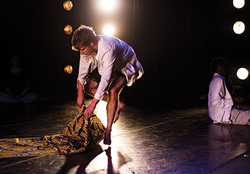 Fabric’s ensemble of five emerges from the wings to a chorus of isiXhosa singing. They carry a variety of instruments and props to tell African tales through words, sound effects and dance.

The inventive integration of props and athletic feats has spellbinding moments. Frenetic movements, repeated across the stage, unleash an endless store of energy.

Four dancers unravel a length of orange fabric, patterned in black and white, from Wandiswa Gogela’s shoulders then wrap themselves in it, moving around and over each other. Fabric is used as prop, theme and character, weaving the tales and dances together to make the piece a whole.

They hold a pole vertically between them and Christina Reed-Richards climbs to its top. The trio shifts.

Moving across the stage, the two carry the pole between them, the third hanging from it, twisting and lifting her body restlessly.

The dancers shine in the solo segments. Deliberate, swift and powerful, Reed-Richards’s moves are fully followed through and she holds nothing back as she flings herself onto the floor.

Seeming to disregard his body, Koyana falls over and over again with immense force at the piece’s close. The audience exhales – then gives them a standing ovation.

Duka Dance Company, a company created by and including dancers from the Scottish School of Contemporary Dance, Dundee, unites artists from Scotland, England, Ireland and South Africa. Their performance of Fabric, one of the final works in the DanceLive Festival, weaves together a collection of tales told through the words, music and movement of this talented and versatile company.

Fabric is a highly creative work, which draws on a variety of influences to deliver an inventive and energetic performance. The company provide their own accompaniment through words, vocals and music, produced on an eclectic mix of instruments both indigenous and recycled. It creates an intricate and enriching backing to their work; an accompaniment that conjures up an image of Africa and beautifully brings to life the stories that make up Fabric.

Contemporary dance aids the strong narrative style of the piece and visually leads the audience through this engaging and touching collection of stories. A physical and imaginative performance, Duka Dance Company masterfully draw together Fabric’s numerous elements to produce a refreshingly different work.